One of our favorite networking events in the entire city of Austin is BASHH (Big Ass Social Happy Hour). What started out as a means for Twitter users in the local market to meet IRL (original name was Big Ass Twitter Happy Hour, or BATHH), later evolved to be more inclusive. After all, not everyone finds their voice on Twitter. But many of them use social networking platforms, so the event became BASHH around 2010.

Today we are sharing with you an interview with Lani Rosales, who cofounded the event with her husband Benn Rosales. Take a few minutes to learn more about the event itself and Lani – they’re both worth your time! 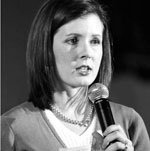 Q: Please introduce yourself to our audience

I’m the Chief Operating Officer at The American Genius (news, tips for entrepreneurs) and The Real Daily (news for real estate pros). I’m also the Co-Founder at the Big Ass Social Happy Hour and the Austin Digital Jobs group.

Q: What are three of your favorite things about Austin?

Q: What is BASHH?

The goal is to bring people together offline that have met online. It’s a laid back social gathering where friends come first and business happens organically.

Q: Why does BASHH stand out in a city with so many networking opportunities?

BASHH skips anything that strokes an ego. There are no speakers, no one is allowed to float around the room and hawk their wares.

The culture is relaxed in a way that if someone walked from person to person handing out business cards and rushing to the next person, they would rub everyone the wrong way. BASHH culture promotes organic connections which is a huge differentiator.

Q: What types of people can get the most from BASHH?

I think people that embody the Austin spirit manage to squeeze the most out of the events. People that are generous with their time and resources, people that want to be better professionals, and people that are tired of snake oil sales, that is who benefits the most.

From tech startup founders, fashion bloggers, financial analysts, and coders to executives, politicians, and builders, the job matters less than the attitude.

Q: Share your #1 Money Tip for newcomers to Austin to tap into the networking scene.

Find your niche. Go to as many networking events as you can possibly find, and whichever one(s) you’re most excited to attend the next time, go there.

Feature Image taken via screenshot of the Annie Ray website. Prints are for sale on the site, and she would surely appreciate your support!

Why Is Everyone Moving to Austin? [Infographic]

Over 150 people move to Austin, TX every day, making it the fastest growing city in the US. With warm weather, friendly dogs, a great business climate, and more breakfast tacos than you can shake a stick at, there’s no wonder why.

Located in Central Texas Hill Country, Austin, TX is a unique reservoir of arts, education, and eclectic people. Though the city has grown from a sleepy college town to one of the country’s largest city, its residents have still managed to “Keep Austin Weird.” Referred to as the Live Music Capital of the World, it’s not hard to walk down any given street on any given night of the week and see a great band playing.

Austin also hosts some of the country’s foremost festivals, including SXSW, ACL, and Fun Fun Fun Fest, all of which contribute to the growing amount of talent relocating to the city. Its business climate enjoys the open policies and low taxes that the rest of Texas has, but it also includes the innovative and hustling nature of the slew of technology startups moving here. ‘Silicon Hills’ is quickly becoming a hotbed for entrepreneurial talent.

At the center of Austin is the University of Texas, which now enrolls over 50,000 students. Saturdays in fall are electric events marked by huge crowds dressed in burnt orange. The school world renowned, topping national rankings in computer science, accounting, and engineering.

Austin is also a unique culinary experience. With events like Truck by TruckWest, the city is heaven for food trailers, with over 1,400 food trailers registered in Travis County alone. Of course, you can also find some of the best barbecue and breakfast tacos in the world in Austin.

There are many reasons people move to Austin, TX. An Austin-based startup, LawnStarter, points out six of them:

This infographic is brought to you by Lawnstarter Austin Lawn Care

A Glance Inside The Austin Startup Scene [Infographic]

Texas has quickly earned a reputation as one of the most profitable states to do business in the US. It deserves this title for a number of reasons, but one of the biggest contributing factors is the flourishing tech industry in its capital city, Austin.

Home to the University of Texas, Austin regularly graduates a plentiful supply of eager students ready to join the workforce and put their knowledge to use. A large number of people visit Austin and never want to leave, and UT students are not impervious to the city’s magnetic pull either.

The University of Texas supplies all areas of the world with accomplished graduates, but a lot of them fall in love with Austin to such an extent that they decide to remain and launch their careers in the same city they received their degrees. This on top of the daily migration of 150 potential employees helps explain why Austin has such a large number of thriving businesses.

One of the biggest reasons Austin is such an attractive spot to start a career is because of the high tech wages provided to workers and the relatively low cost of living. The average tech job in Austin pays over $93,000, but the average housing cost is barely $200K. Not only are homes in Austin affordable, but so is office space, which currently rents at about $25 per square foot.

The venture capital provided by the companies listed in this infographic — over $300 million in the first quarter of 2014 alone — ensures that startup businesses in Austin continue to grow and provide its residents with valuable services and job opportunities.

This infographic acknowledges the companies and supplementary resources that come together to make the existence of startups in Austin possible.